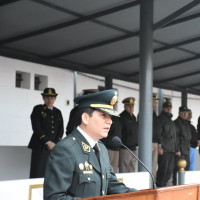 I graduated as second lieutenant of the National Police of Peru in December 2008, receiving as recognition a replica of the Espadín de Mando of second lieutenant Mariano Santos Mateos, Hero of the PNP, for having occupied 2nd place in the general merit table. Later, I graduated as a Bachelor of Administration and Police Sciences, and as a lawyer graduated from the San Martin de Porres University in the Specialty of Criminal Law. Likewise, I have taken various courses related to peacekeeping police operations, including: II course for the United Nations Police (2017) - CECOPAZ PERÚ, Police Training for Peacekeeping Operations (2018) - CENCAPOPAZ ARGENTINA and United Nations Police Course (year 2020) - CECOPAZ CHILE.

I have written several articles, including the one called "THE NATIONAL POLICE OF PERU AND ITS PARTICIPATION IN THE OPERATIONS OF MAINTENANCE OF THE PEACE", published on the PNP web portal and in the 6th edition ALCOPAZ magazine, where I offer action proposals for operationalize the participation of the National Police of Peru in United Nations peacekeeping operations.

Chief of instruction departament and instruct…

Administration and discipline management at s…

Duty officer and assistant of the police chie…

1. The National Police of Peru and its participation in the operations of maintenance of the peace.
2. Peacekeeping Operations: Opportunities and Challenges for the National Police of Peru.
3. ALCOPAZ´S INFLUENCE ON PARTICIPATION OF THE PERUVIAN NATIONAL POLICE IN UN PEACEKEEPING OPERATIONS
4. Field Experiences of Police Personnel Deployed on a Peace Mission: Opportunities and Challenges for the PNP