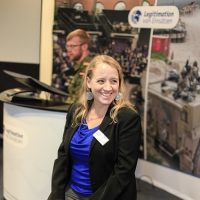 Johanna Wolf de Tafur works as a Peace, Conflict & Security Consultant and Trainer with ZIF, GIZ the German Armed Forces and various INGOs. Her field experience includes serving as a Human Rights Officer in the UN Stabilisation Mission in DR Congo (MONUSCO) and in Papua, Indonesia with Peace Brigades International (PBI) as well as a number of short-term deployments. She has worked extensively with both military and civilian experts committed to bridging the divide between organisational cultures.

Johanna is registered as a Short- and Long-term Election Observer to serve in OSCE/ODIHR and EU Election Observation Missions. Her particular strength is designing and facilitating interactive seminars and workshops on a variety of topics such as: Human Rights; Peacebuilding; Protection of Civilians; Peacekeeping; Civil Conflict Resolution; Gender, Peace and Security.

* All trainings will be customised and can be delivered in English, French, Spanish or German.*